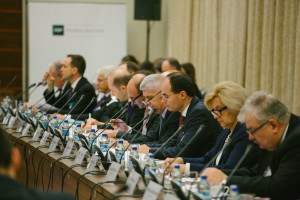 The eighth Full Forum of the Vienna Initiative assessed key achievements over the past year and proposed an agenda for future cooperation at a meeting hosted by the National Bank of Poland in Warsaw on 18 November on cross-border banking issues affecting Central, Eastern and South Eastern Europe.

Session 1: Review of the Economic Situation in CESEE